These are the jokes about committee collected over the net, nothing is to be implied.

- A committee is best composed of three people, with one who is always sick and another who is always absent.
- A committee is composed of people who individually can do nothing, who come together to conclude that nothing can be done.
- The difference between a good committee and a bad committee is that a good committee sleeps standing up and a bad committee sleeps horizontally
- A committee is a group that keeps minutes and loses hours (Milton Berle)
- Having served on various committees, I have drawn up a list of rules: 1) Never arrive on time; this stamps you as a beginner. 2) Don’t say anything until the meeting is half over; this stamps you as being wise. 3) Be as vague as possible; this avoids irritating the others. 4) When in doubt, suggest that a subcommittee be appointed. 5) Be the first to move for adjournment; this will make you popular; it’s what everyone is waiting for.  (Greater Kansas City Medical Bulletin)

Laugh at the jokes. However, the facts are:

- Resource Committee: This is the source of ideas to ensure the resource and cash needs of the nonprofit organization for operating, investing and financing activities throughout the year.

- Ad Hoc Committee (task forces): This committee is appointed by the Board Chair to deal with a specific issue and is dismissed when the issue is resolved.

- Project(s) Committee: This committee is to carry out and monitor a particular fundraising event, or community project from start to finish.

This is the significantly financial, intellectual and influential resources to a nonprofit. The typical advisory board may consist of the following individuals:

- Wealthy
- Influential
- People with considerable contacts
- People with connection of contributions
- People to be future board members
- People who represent the diverse needs, aspects and interests of community
- Persons of fame or recognized superiority in government
- Persons who represent small business owners
- Distinguished individuals committed to the long-term success of the nonprofit organization

Their advice will be sought and be taken seriously regarding to plan and to operate the nonprofit policy and procedures. However, the Advisory Board has limited authority over the nonprofit's activities.

The director's kit provides an individual nonprofit director with an organized means of:

- Volunteer burnout
- Other areas of their lives start to suffer from lack of attention.
- He or she did not feel appreciated
- Volunteers need to be recognized, respected, appreciated and rewarded as well
- Emotionally and physically drained.
- Volunteers do need some help from other volunteers
- Quality of contributions are equally important to the quantity of contributions
- Volunteers' advice, guidance or suggestion should not be taken as criticisms
- Volunteers are not free, both to the nonprofit and the individuals. Without volunteers, the organization would have to incur the cost of hiring employees. On the other side of the coin, volunteers forgo their valuable resources by committing to the nonprofit.
- Not being reasonably well informed of the nonprofit's activities
- Not being participated in the decision-making process
- Overlooking conflicts of interest, and duty of care and loyalty to the nonprofit
- Unexpectedly experience between the paid staff and volunteers
- Generally, use of volunteers increases cost of training, supervision and liabilities etc. to a nonprofit

Nonprofit employers have an obligation as a citizen, that is to obey the law and to be knowledgeable about the laws to which they are subject.

One way to reduce operating expenses is to use contract labor instead of hiring employees. In doing so, nonprofit employers can save payroll taxes, employee insurance costs and other expensive benefits. On the other hand, many potential workers would rather not have Social Security taxes withheld from their paid checks, and they are well aware that independent contractors are not subject to withholding.

Under common law, an individual who performs services for an employer, and that would include a nonprofit organization employer, is an employee and not an independent contractor, if the organization has the right to control and direct the work, not only with regard to the result to be accomplished, but also as to the details and means by which the result is accomplished.

Behavioral Control as Evidence
1. Instructions - If the religious or other faith-based organization has the legal right to mandate when, where, or how (with what tools, personnel, and methods) the work is done, that would indicate an employer-employee relationship. The organization does not have to exercise the right as long as it has the right.

2. Training - By the organization providing the training, it would appear to control how the work should be performed, thereby indicating an employer-employee relationship.

3. Specifying the Worker - The organization, by selecting only workers who use approved methods, would be exercising control indicating an employer-employee relationship.

4. Available to the Public - If the worker holds him/herself out to the public as a separate economic entity, the worker would appear to be an independent contractor.

5. Employing Assistants - If the worker hires, supervises, and pays assistants, this would be evidence that the worker may be an independent contractor.

6. Work Sequence - If the organization specifies the order in which the work is to be done, it would appear that it is telling the worker how to do the work, thus indicating an employer-employee relationship.

7. Reporting - A worker that is required by the organization to report to it indicates that the organization has control over how the worker does the work, and is an indication of an employer-employee relationship.

8. Hours - An organization that specifies precisely when the work is to be done appears to be an employer.

9. Full-Time Effort - If the workers were full time, it would appear that they were economically dependent upon the organization, which would indicate an employee-employer relationship.

10. Location - If the organization tells the worker where to perform the work, that would be evidence of an employer-employee relationship.

Degree of Financial Control as Evidence
11. Reimbursement - Employees are less likely to have unreimbursed expenses than are independent contractors. Therefore, the organization that controls reimbursable expenses of the worker is acting like an employer.

12. Investment - If the worker has a substantial investment in the work, it would indicate that the worker is an independent contractor.

13. Outside Work - If the worker has the right or ability to devote equal priority to other jobs, for other entities, it would be evidence that the worker is an independent contractor.

14. Fixed Pay - If payment were "by the job" as opposed to by workers' hours, it would be evidence of an independent contractor arrangement.

15. Risk of Loss - A worker who bears the risk of financial loss or gain from the work performed is more likely to be an independent contractor.

16. Tools and Supplies - If the worker provides the tools, equipment, material, and supplies to get the job done, the worker is probably an independent contractor.

Relationship of the Parties as Evidence
17. Termination - If the arrangement is contractual, the worker is probably not an employee.

18. Can the Worker Quit? - If so, it is probably an employer-employee relationship.

19. Benefits - If the worker can receive employee benefits, worker is probably an employee.

20. Continuing Relationships - Longstanding relationships tend to indicate that workers are economically dependent upon the organization, and therefore they would be employees.

21. Integration of Work to Regular Business Activity - A worker who provides services that are a key element of regular ongoing operations is more likely to be an employee.

22. The Parties' Intent - If organization and worker demonstrate a mutual intent that the relationship is one of hirer-independent contractor, it supports that relationship. 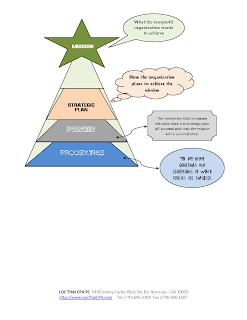 Click on the image to see its full size
Posted by LOC THAI, CPA at 11:54 AM No comments:

Nonprofit organizations depend or rely heavily on the people resource. Unlike business world, in order for a nonprofit to be successful, it must be:

- Motivated
- Not calculating
- Not cunning, and
- Merciful, kind & hearty

No mission can be accomplished without people. The altruistic mission of a nonprofit attracts virtually all potential volunteers, and this is a real asset for the nonprofit.

The fiscal year-end financial report will generally include:

1.   A Statement of Net Assets: Which is the Balance Sheet of for-profit entities. Sometimes it is informally referred to as a Statement of Financial Position.

2.   A Statement of Activities: Which is the Income Statement of for-profit entities. It generally is a financial summary of mission accomplishment for the fiscal year.

3.   A Statement of Cash Flows: It sounds like the for-profit businesses. However, it has its own terminologies or definitions of resources and usage of cash.

4.   A  Schedule of Expenses by Function: Functions are described as Program, Administration & Fundraising.

5.   Notes to the Financial Statements: Additional notes and information added to the end of the financial statements to supplement the reader with more information.

In-kind contributions should be reported as contribution assets, revenue or expenses only if they are:

- Requiring specialized skills, and are performed or provided by professionals such as: Accountants, teachers, electricians, lawyers, doctors, etc.

The in-kind contributions should be measured at FMV, fair market value.


Gifts-In-Kind: The Fund Raiser's Guide to Acquiring, Managing, and Selling Charitable Contributions Other Than Cash and Securities